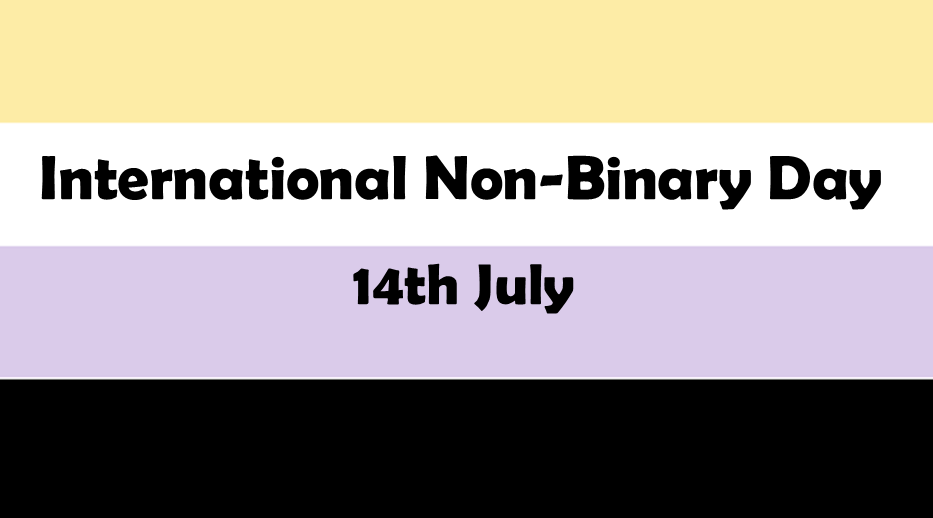 The 14th of July is ‘International Non-Binary People’s Day’ and to mark the occasion Abs from the LGBTQ+ Network has taken a look at the representation of non binary people in the media.

Non-binary is defined as any gender identity which falls outside of the binary of ‘man’ or ‘woman’. The term encompasses a whole spectrum of identities, such as: agender, genderfluid, and genderqueer. The amount of people in societies across the world who fall into this categorisation is huge, and yet even now in the 21st century, there seems to be a lack of representation of non binary people in popular, mainstream culture. This made me think about how much non binary identities are (or aren’t!) represented.

One of the first things I noticed is that there isn’t a lot of non-binary representation in mainstream media – especially in the things I usually watch. When I started thinking about any non binary representation in the media, my mind immediately jumped to one of my favourite TV programmes in the past couple of years; ‘Feel Good’. Feel Good is written by, and stars, comedian Mae Martin who themselves is non-binary. The show is partly based on Mae’s real life, so this may be cheating slightly, but I think this is why I love this show and its portrayal of non binary people so much; because it’s real. It feels genuine.

Feel Good follows Mae as they explore their feelings around gender. It feels very much like how people would discover themselves in real life, especially in the scene when Mae discusses their gender with their partner. Feel Good is probably my favourite portrayal of a non binary person in entertainment media because I can actually relate to Mae’s character and the situations they are in.

Another TV show that has some non-binary representation is ‘Good Omens’, although it’s not explicit. Good Omens is based on the book by Neil Gaiman and Terry Pratchett. It follows the story of main characters Crowley, a demon, and Aziraphale, an angel, as they try to stop the apocalypse. The pair have both been confirmed as non binary by Gaiman who said that angels and demons don’t have a gender, but this has yet to be discussed in the show.

I do feel slightly disappointed that this has not been addressed directly in the show because I feel like this could have been excellent and direct non binary representation. It also felt a little disingenuous for Gaiman to say this when the characters present as mostly male and masculine the majority of the time with no comment on gender fluidity within the show. If you’re a fan of the show, you would have to actively seek this information out rather than it being part and parcel of the show itself.

Very recently, Loki from the Marvel Cinematic Universe has been confirmed to be genderfluid in Disney’s TV mini-series ‘Loki’. However, for people who know their Norse mythology, this came as no surprise! In the myths, Loki is a trickster who often changes shape, gender, and species whenever it suits. This just goes to show that being non-binary is not a modern concept; it’s just that nowadays people are becoming more knowledgeable about gender identities, and part of this is because of the increase in representation in mainstream media.

While TV has a few sparse examples of non-binary representation, the literary world has become a home for many non binary characters.

The first example that comes to mind for me is the book Gender Queer: A Memoir by Maia Kobabe, which documents the writer’s personal experiences with eir gender identity (Maia uses the pronouns ‘e’ and ‘eir!). It is a beautiful and heartfelt commentary on discovering your gender identity and is definitely worth a read. It also has gorgeous illustrations because Maia is a comic book artist so it’s visually worth checking out too.

The Booker Prize winning novel ‘Girl, Woman, Other’ by Bernadine Evaristo features a non-binary character named Morgan. They are non-binary and find a community and acceptance in online spaces. Evaristo’s novel also won the Fiction Book of the Year at the British Book Awards in 2020.

Kacen Callender’s ‘Felix Ever After’ centres around the main character of Felix who is a young trans person exploring their gender identity. Felix navigates the pitfalls of love and online dating as a young LGBTQ+ person. At the start of the book, Felix identifies as a trans man, but by the end has realised that they are a demi boy- an identity which falls under the non binary umbrella. Felix Ever After won the Children and Young Adult Literary Award at the Stonewall Book Awards ’21.

Non-binary representation seems to be increasing across popular culture in all media formats. For me personally, this feels driven in particular by the influx of representation of trans and non-binary people in novels across age groups and genres. For people who identify as these genders, who historically haven’t had much representation, to see people who face similar journeys, challenges, and more in mainstream media, it has meant so much to see themselves reflected in this positive light. More representation will only further people’s appreciation and happiness at being seen, and also raise awareness and understanding of genders outside of the binary.