Creative Support service users and staff have cycled the equivalent distance of The Pennine Way as part of a fitness drive.

The 268 mile route runs from Edale in Derbyshire to Kirk Yetholm on the Scottish border. It passes through the Peak District, Yorkshire Dales, North Pennines and Northumberland.

But staff and residents from Joules House, Whalley Avenue and Marlborough House in Sale, Greater Manchester, completed the miles on an exercise bike in the communal area at Joules House.

The Pennine Way Challenge was the idea of support worker Robert Brimmell who was keen to get both residents and staff more active.

Throughout the challenge, which ran over a week, they made healthy smoothies and at the end of the week everyone joined together for a healthy meal in Joules House.

Robert said, “The Pennine Way can be a tough challenge to walk or cycle. I thought we could try to do the miles without having to navigate Roman roads, peat bogs, moors and mountaintops. Just like working at Joules House, it was all about teamwork.” 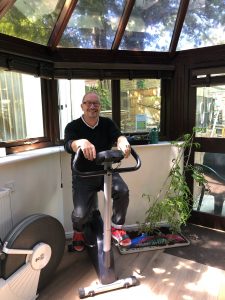 Rob’s next challenge, between July 29th and August 4th is for the team to climb the equivalent of the worlds’ tallest towers on a step machine. By the end of the week they’re aiming to complete the:

Rob’s aiming to climb the equivalent of one tower a day with healthy snacks and a celebratory meal at the end of the week.

Creative Support Limited is a Registered Society under the Co-operative and Community Benefit Societies Act 2014, providing a range of person-centered services for people with mental health needs, learning disabilities and other support needs. Founded in 1990, the charity has gained an excellent reputation for its dynamic approach, strong values, and commitment to quality. Creative Support is recognised as one of the largest national not-for-profit providers of prevention and care services in the country working in 69 local authority areas, employing 5,600 staff and supporting 7,000 people with support and care needs.The charity aims to support service users by promoting their social inclusion, developing their independence and confidence, and promoting their physical, mental, and emotional wellbeing.